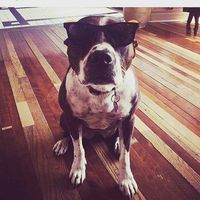 Turbo Haüs Presents: Fundraiser in support of the Montreal SPCA

We'd like to annouce a special fundraiser to help the Montreal SPCA in their legal battle against the city and impending breed specific pit bull ban.

The fundraiser will take place at Turbo Haüs (5011 Notre Dame O) this Thursday, October 6 at 9pm. Tickets are $15 at door. ALL MONEY EARNED AT THE DOOR WILL BE DONATED!